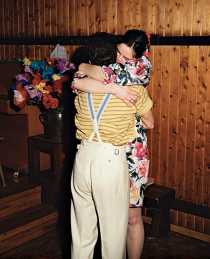 
"The Days of Life" is a long-term portrait project in which Andreas Mader repeatedly photographed the same people. It has been shown in solo and group exhibitions in Germany, Luxembourg and Austria along with works by Richard Avedon, Rineke Dijkstra, Nan Goldin, Roman Opalka and others. With 100 illustrations, it covers a period of thirty years and forms a mosaic-like, large narrative of life.

"In 1988, I began photographing my family and close friends. The first pictures emerged sporadically from our time together. We were young. We spent entire days with each other and talked through the night. We were close, intimate.

As time passed, I took more deliberate portraits ot those close to me. I watched them as they came togehter and separated, as they had children, and wathed as their children grew. I observed how they were alone and how they were with others, how they aged and took each other by the hand so as not to get lost along the way.

Some of the friends moved away. To another place, to another country. A decade ended, a new century began. We saw each other less often, traveled to visit so as not to lose sight of each other, and I took photographs all the while. The differnet locations, the changing relationships, the transformation of physical appearance, and the imperceptible passage of time create the backdrop in front of which the same people stand before the camera time and again, rendering life visible."
Andreas Mader

Opening and Artist Talk:
8 August, 7 pm at the archive
» mehr