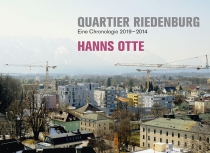 With his documentary approach, Salzburg photographer Hanns Otte is seen as one of the most high-profile, most resolute representatives of the genre - not just in Austria. Already with his 1986 debut work Salzburger Vorstädte he expressed his interest in the symbolic traces of (everyday) architecture in the urban space using a matter-of-fact mode of representation, illustrated in sensitive black-and-white photographs. This time, on his own behalf, he has chosen to focus his lens on a clearly demarcated 35,000 m2 area comprised of somewhat run-down military barracks in the Riedenburg area in the centre of Salzburg. Thus he has sensitively preserved the last traces of the former military command centre and adjacent public sports hall before they make way for the ‘Riedenburg Platz’, a new urban residential quarter. In a rigorous chronological arrangement the photographer has depicted the process during which the area is to be transformed into one of the largest residential developments in a prime Salzburg location, with more than 300 affordable and privately financed apartments in 22 buildings. The book is complemented by an in-depth exploration of the century-old site of Riedenburg and its chequered history by Salzburg historian and architecture theorist Roman Höllbacher.
↳  More about the book

Opening and Artist Talk:
8 August, 7 pm at the archive
» mehr