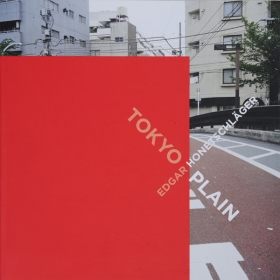 The Austrian artist Edgar Honetschlaeger makes his way through a de-serted Tokyo in the early hours of the morning. The skies are overcast and leaden, and pedestrians in the narrow streets are few. That is how he portrays the city he moved to in 1991, a city he likes to call his own. His Tokyo is the Japan of everyday life: the real city rather than the media cliché. Single-family homes with a strip of garden a couple of feet wide rather than skyscrapers; relics of a rural, farming culture in a city rather than the futuristic setting of a Blade Runner movie.

This quest for islets of peace and tranquillity within a megalopolis also imbues the author’s texts: experiences and events from the life of the Japanese capital as well as Zen-like meditative observations. They punctuate the book like bookmarks inserted between the photographs, which were deliberately taken with a simple medium-format camera.

Edgar Honetschläger, *1967 in Linz; lives and works in Vienna and Tokyo.